On 12 July 2021, Simon, an active member of Swindon Bats, sadly passed away having suffered some severe health problems for some time.

For many years, Simon regularly took part in our Wednesday afternoon tenpin bowling sessions with great enthusiasm.  He enjoyed some playful banter with his team mates and became particularly excited when he won (he was very competitive)!

In May 2016, Simon and his team travelled to Wigan to take part in the National Blind Tenpin Bowling Association’s Winter Trios competition finals.  After a day’s bowling, he was very excited to discover that his team had come 3rd in this competition.

Simon also attended our Monday Club on a regular basis and enjoyed sharing information and demonstrating various gadgets that he found useful as a totally blind person.  These gadgets included a 1-cup machine for boiling just one mug of water for making a drink.  This allowed him to make a hot drink without overflowing his mug with boiling water.

Sadly, a few years ago, Simon had to give up his participation in tenpin bowling for health reasons –his team has not played so well since!

It is with great sadness that we announce the passing of our dear friend Brian Hook who died after a long illness on 8 June 2020.

Brian was an enthusiastic genealogist and, for many years, was involved in organising trips to London for other genealogy enthusiasts.  He took part in Swindon Bats events such as skittles along with his wife Ann who is one of our visually impaired members.

Brian was a real gentleman who enjoyed helping us whenever asked to do so.  He liked to have a laugh and a joke with us all whenever he dropped Ann off at the Monday Club.

Until a few years ago, when he had to give up driving due to illness, Brian was a regular visitor of the Monday Club.

RIP Brian – we will miss you.

One of our founder members, Derek Smith, sadly passed away on 31 January having been in hospital for 6 weeks.  Derek had a fall while out and about one day and landed in some bushes.  Scratches on his arm caused his hand to swell which necessitated his stay in hospital. We were all very shocked at the news of his passing.

On 20 February, 16 of our members attended Derek’s funeral at the North Wiltshire Crematorium near Royal Wootton Bassett.  This was a celebration of his life and of his love for his family and friends.  It ended with the song ‘Always Look On The Bright Side of Life’ which sums up Derek’s character.

Derek was always ready to pull your leg or share a joke with anyone who came into contact with him.  For a few Christmases, he was our cuddly Santa, handing out presents from a sack at our Christmas parties.

He enjoyed tenpin bowling on a regular basis until it became necessary for him to give it up for health reasons.  He was a keen player in the National Blind Tenpin Bowling Winter Trios and Summer Doubles competitions for many years.

Note:    £306 was raised at Derek’s funeral in lieu of flowers and has been donated to Swindon Bats.  Thank you to the Smith family for their kind donation. 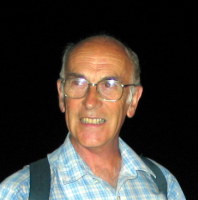 On Wednesday, 29 August 2018, members attended the funeral of one of our dearest friends and volunteer, David Bindon, who sadly passed away on 2 August having been ill for some time.

David was a Pin Spotter for our bowlers for several years and was always fun to have around.  He joked about the fact that he often lost when bowling against visually impaired people.

David was happy to help with anything and designed and built two guide rails for the use of our bowlers.  These guide rails help totally blind bowlers to line up accurately before taking their shot.

David will be sadly missed by all who knew him – rest in peace David, we’ll never forget you.

Tom was a jolly Scotsman who could always put a smile on our faces. He enjoyed tenpin bowling and was very disappointed when he had to give it up in 2015. He was a very popular member of Swindon Bats.