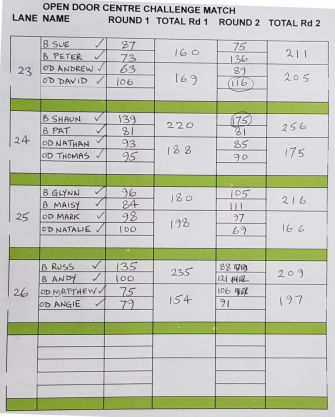 On 3 November a team from the Open Door Centre joined us at Tenpin Swindon to enjoy some tenpin bowling.  Once balls were chosen, and drinks and food were purchased, the bowling began at 7 pm.

During the first game, there was lots of excitement as strikes and spares were scored for both teams.  At the end of this game, the score was a draw at 2 games each.

There then came a short break when glasses were refilled, before we started again for the second game.  Again, lots of strikes and spares were scored on both sides.  The Open Door Centre team were happy to try bowling using our simulation glasses for part of the games.

At the end of the second game the score was 6 games to Swindon Bats and 2 to the Open Door Centre.  I am sure everyone had a good time.

Perhaps we will do it all again next year – here’s hoping!

Another match with our friends at the Zurich Community Trust was played on 29 September.

All bowlers and helpers met at the usual time of 6.45 pm and play began at 7.

There were lots of strikes and spares scored for both teams with much banter between players.  At the end of game 1 the score was 2.5 to ZCT and 1.5 to Swindon Bats.

After a short break, play began again.  Again, many strikes and spares were scored and at the end of the second game the score was 6.5 to ZCT and 1.5 to Swindon Bats.

In both games, during frames 4, 5, 6 and 7, ZCT's players were encouraged to wear glasses which simulate various eye conditions.  A couple of them even wore a blindfold to see what it is like for someone who sees nothing at all.

Congratulations to Mark Flay and his team!  The teams were:

See more pictures in our gallery.

The next match with the Zurich Community Trust will take place some time towards the end of November 2022 but who will win this time?!

Zurich Community Trust invited members of Swindon Bats to demonstrate their bowling skills at the Super Heroes Series event in Dorney Lake, near Windsor, on 20 August.

ZCT organised a bus to take Andy, Russ, Pete and Sue to this event along with members of the Open Door Centre, Swindon, and volunteers from ZCT.

Members of the Open Door Centre were taking part in sporting activities and, as one of them had to register for his race by 9.15 am, we had an early start with the bus leaving Swindon by 7.40 am.

We arrived just in time for registration and found that a portable skittles alley had been hired and constructed for the event.

The idea was for us to show anyone interested how visually impaired people bowl.  Sighted visitors had to wear the simulation glasses or a blindfold so that they had some idea of how it is for us.

Many people visited us including children and wheelchair users who all enjoyed giving it a go.

The highlight of the day was meeting Clare Balding who was there to film the event, highlights of which will be shown on Channel 4 at 8.30 am on 4 September and will be available on All 4 afterwards. Clare was filmed wearing simulation glasses and having a go at knocking skittles down.

We arrived back in Swindon at around 6.45 pm feeling tired but happy to have had a successful and enjoyable day.

Thank you to Mark Flay for inviting us to volunteer at this event.  For more information about Super Heroes Series visit Superheroes Series.

See more pictures in our gallery.

As the National Blind Tenpin Bowling Association is closing due to a lack of volunteers in May this year, some of our bowlers have decided to join the British Blind Sport (BBS) Tenpin Bowling leagues.  The first of these that we will be taking part in is the Summer Pairs which begins on 16 May 2022 with our first match on 18 May.

This competition is played in memory of all those who were regular bowlers but have now sadly passed away.  The first games were played on 12 January, and the competition will continue until 7 December 2022.

For full details, and the latest league table click here.

Donate to Swindon Bats at No Cost to You!

We have registered with AmazonSmile - a system through which Amazon donates to charities at no cost to the shopper.

AmazonSmile is a simple and automatic way for you to support your favorite charitable organization every time you shop, at no cost to you. When you shop at smile.amazon.co.uk, you’ll find the exact same low prices, vast selection and convenient shopping experience as Amazon.com, with the added bonus that Amazon will donate a portion of the purchase price to your favorite charitable organization. You can choose from over one million organizations to support.

How do I shop at AmazonSmile?

Remember to select Swindon Bats Sports & Social Club as your charity to support!